...based on mutual respect, true friendship and a common vision for global peace and prosperity

Over the centuries, Ethiopia has enjoyed close economic, diplomatic and cultural relations with the United Kingdom. In fact, Great Britain was among the first countries to open an embassy in Addis Ababa, while Ethiopia was the first African country to establish an embassy in London. Both countries collaborate on many issues of mutual concern at the regional and global levels. 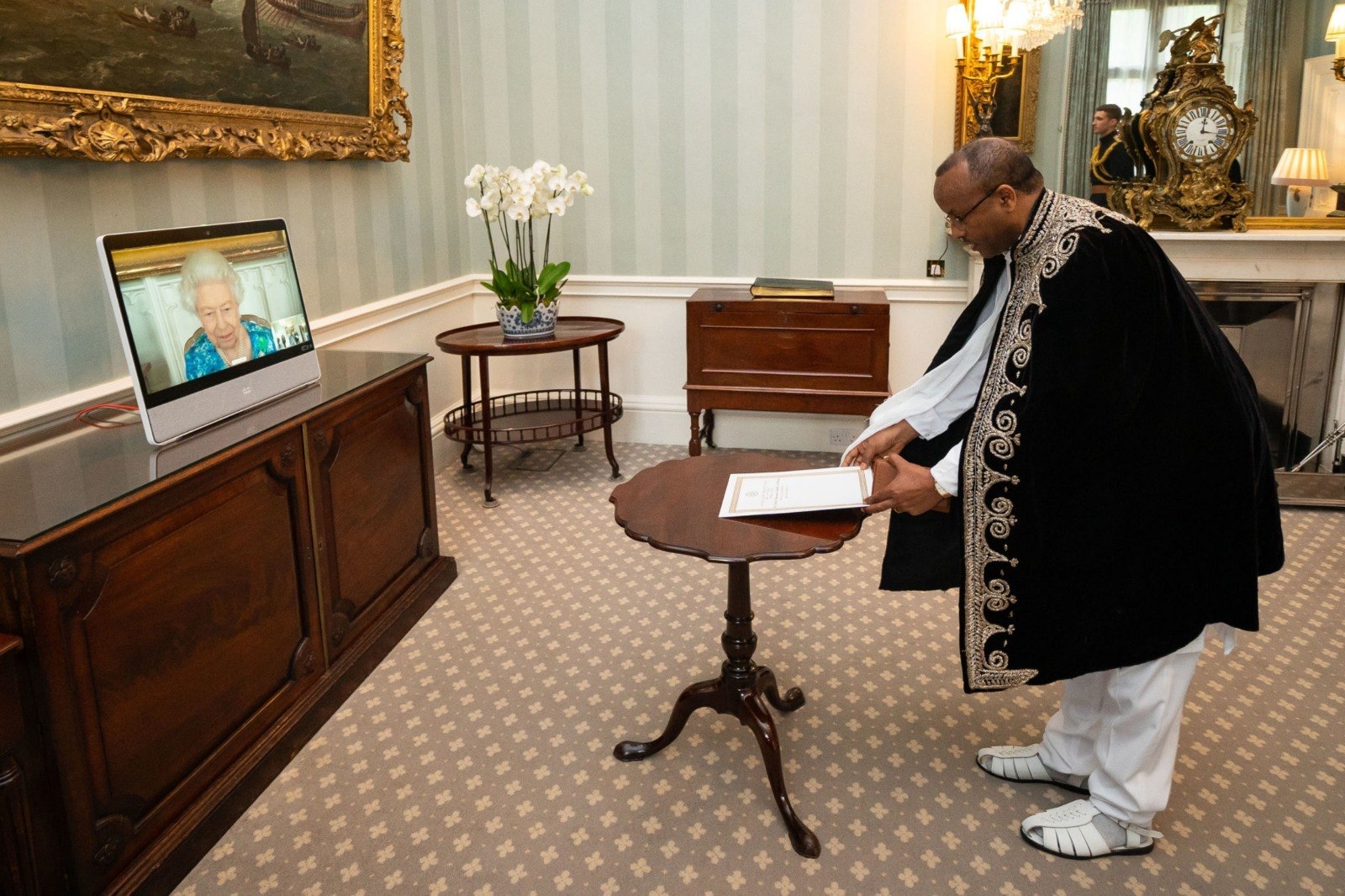 Ambassador Teferi Melesse Desta presents his credentials to Her Majesty The Queen via video link, May 2021

Ethiopia is a multi-party federal democracy with legislative authority resting with the government headed by the Prime Minister and the elected House of Representatives (547 members) and the House of Federation (112 members).

The Prime Minister is chosen by the party in power following multi-party democratic national and federal state elections which are held every five years. Parties can be registered at either the national or the federal state level.

The President is elected by the members of the House of People’s Representatives.

Connect with the Ministry on:

Members of the Government of the Federal Democratic Republic of Ethiopia.

The official website of the government of Ethiopia with the latest news and information for citizens, business people, and foreigners.

Browse all
The National Electoral Board of Ethiopia (NEBE) announced that the upcoming sixth national elections will be held on 21st June 2021. The board also passed the decision to hold the poll in Addis Ababa and Dire Dawa City Administrations on the same day with the national election schedule. The upcoming elections will arguably be Ethiopia’s first free and fair elections.…
Ethiopia Decides: The countdown to Ethiopia’s 6th National Elections begins
On 18th May, Prime Minister Abiy launched the 2021 edition of the Green Legacy Initiative, a tree-planting campaign aimed at curbing the effects of climate change and deforestation. During the upcoming rainy season, Ethiopia plans on planting 6 billion seedlings. PM @AbiyAhmedAli officially launched the 2021 edition of the #GreenLegacy Initiative. This year, 6 billion seedlings🌱 will be planted across…
Ethiopia readies for 2021 Green Legacy tree-planting season
A new festival was launched in April celebrating the legacy and impact of Emperor Haile Selassie I on the city of Bath. The Freedom in the City festival runs from April until the end of October with a series of online and in-person events exploring Ethiopian and Rastafari culture which are open to the public.
The City of Bath festival celebrates Emperor Haile Selassie’s legacy
Chris Packham, Joanna Lumley, and Zoë Wanamaker are some of the celebrities backing an appeal that was launched on 12th April by UK-based tree-growing charity, Tree Aid, to save Metema Forest in Ethiopia. Metema forest is made up of Boswelia trees, which produce frankincense – a precious tree resin that is used in essential oils around the world. Without urgent action,…
Celebrities join forces with Tree Aid to save Metema forest from extinction
Ambassador Teferi held a virtual courtesy call with the International Maritime Organization (IMO) Secretary-General, Mr. Kitack Lim, where he formally presented his credentials as Ethiopia's Permanent Representative to the Organization. Though landlocked, Ethiopia has been actively engaging in the maritime industry since becoming an IMO Member State in 1975.
Ambassador Teferi presents credentials to the IMO
Ethiopian Airlines has partnered with UNICEF for the global distribution of vaccines and other life-saving supplies. As per the agreement, Ethiopian will support the prioritisation of the delivery of COVID-19 vaccines, essential medicines, medical devices, and other critical supplies to respond to the pandemic.
Ethiopian Airlines partners with UNICEF for global COVID-19 vaccine distribution
Mr. Beyene Gebremeskel assumed his position as Deputy Head of Mission in January 2021. Overseeing the Business Diplomacy Department, Mr. Gebremeskel’s priorities will focus on enhancing Ethio-UK relations especially in trade and investment, institutional partnerships, technical and skills transfer, and cultural heritage.
Deputy Head of Mission assumes role in London
On 3rd February, Chatham House’s Africa Programme hosted a webinar on Ethiopia’s upcoming elections. Panellists at the virtual event discussed preparations for the upcoming polls, whether the Federal Government will be able to deliver secure, free, and fair elections under the current conditions, and the priority issues likely to be raised during the campaign period.
Chatham House hosts webinar on Ethiopia’s upcoming elections
The Ethiopian government's victory over the Tigray People's Liberation Front came at a high cost, and the humanitarian situation in northern Tigray remains grave. But only an Ethiopia at peace, with a government bound by humane norms of conduct, can play a constructive role across the region and beyond.
Toward a Peaceful Order in the Horn of Africa by PM Abiy Ahmed
Ethiopians and friends of Ethiopia worldwide anticipate general elections this June after a prolonged Covid-19 postponement. The election will secure the appointment of members of the House of Peoples' Representatives and regional state councils. This electoral test will be the first for the ruling Prosperity Party. Opposition political parties say they centre their ambitions not only around party winnings but…
Panel confirms Ethiopia prepping for June elections, Chatham House Africa Program
Bath has always been the first port of call outside London for Ethiopian Ambassadors to the Court of St James, and the virtual visit of Ambassador Teferi Melesse to three institutions in the historic and spa City of Bath on 28th January was no exception.
Ambassador Teferi embarks on a virtual trip to Bath
COP26 President-Designate, Alok Sharma, visited Addis Ababa and Gabon in January to discuss how the UK can work with Ethiopia to address climate change challenges. In his first overseas visit since becoming full-time COP26 President, Mr. Sharma met leaders from government and civil society, stressing the need for urgent climate action ahead of the important UN climate change summit the…
Alok Sharma visits Ethiopia in first foreign visit since his full-time appointment as COP26 President
What was the purpose of your recent visit?
How would you rate the overall experience?
What made you choose this score?
Thank you,
we appreciate your help.
Please use 140 or less characters
1/3
Prev
Next
Leave us your feedback
It seems that your location doesn’t match.
This is a website of Embassy of the Federal Democratic Republic of Ethiopia in London, UK. Would you like to continue anyway?
-
-
This Website is using cookies.
This website uses cookies. By continuing to use this website you are giving consent to cookies being used. For information on cookies and how you can disable them, please visit our Cookie Policy